In this article, I want to discuss unit vector generation. It was inspired by the recent addition of random-2d and random-3d functions in Quil API. The goal is simple: write a function that generates a random unit vector, both in 2D and 3D. This article doesn’t use advanced math (e.g. statistics) and discusses the matter from software engineer point of view who forgot college course about statistics and theory around generating random values.

Let's start with the 2D. Here the naive approach that I would try first:

Now let’s see how well it works in practice. To do that let’s generate 2000 vectors and draw them. When drawing I "cut" beginning of vectors to make image cleaner:

Turns out it's even worse than the first approach. At least now we can clearly see that it's bad.

Let's try yet another approach. In the first and second approaches we saw vectors clustered around certain angles. So we need to make angles uniformly distributed. To achieve that instead of generating x and y we’ll randomly choose an angle and calculate x and y based on the angle. In other words we'll generate a unit vector in polar coordinates instead of cartesian. In cartesian coordinates vector is defined by a pair [x, y] while in polar the pair is [r, ϕ] where r is the vector length and ϕ is the angle: 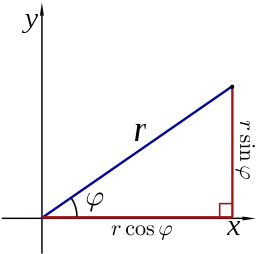 Great, we figured out 2D. What about 3D then? The situation is very similar. Let’s try the first (naive) approach;

Unfortunately my visualization sucks. I couldn't come up with a better technique to draw vectors in 3D. Red/green/blue lines are X/Y/Z axis. It's kinda hard to see if the vectors uniformly distributed or not. Let's try other approaches. I'll skip code for the second approach (it's equivalent to 2D), here is the visualization: 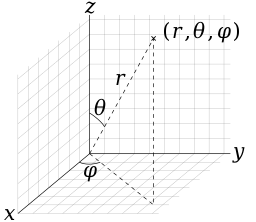 The algorithm is the following:

Results surprised me. My mind tells me that the third approach is the best, but my eyes prefer the first approach. The visualization from the first approach feels more uniform, I see fewer clusters. But maybe it's inefficiencies of my 3D visualization: some vectors are close to the camera and they look bigger and more clustered while the ones which further look smaller. If you have ideas how to fix it - please leave comments. I'm curious how better I can visualize it.

If you need to generate random vectors think carefully if your approach produces uniformly distributed vectors (if it matters for your application). I like the approach with polar/spherical coordinates because I can "see" it. If you google around you'll find suggestions to use gaussian distribution but to me it's harder to understand.

Also while working on article I found embarrassing things:

If you want to play with generation and animation you can use Quil sketch editor for Clojurescript: 2D sketch and 3D sketch. If you prefer Clojure - checkout this project.